Woof, it's been quite the week for Facebook. A little bit of neglecting younger users here, a little bit of worldwide outage there. I'm sure Zuckerberg's too busy in his cryo-pod or watching Squid Game to figure it all out.

But we're here to talk you through the current wilderness that is the Facebook algorithm. Does it work for users? No. Does it work for businesses? No. Is everyone still using it regardless? Yes. So, we'll have to figure it all out, together.

Sounds simple right? It's beating the algorithm which is the difficult part. So, in order to win, you've got to know your enemy. Let's ask:

What is the new goal of the algorithm?

Well, the goal is basically to "show stories that matter to users", according to Adam Mosseri, VP of Facebook's News Feed Management. So, the change has meant that Facebook now cares more about users finding value in the time spent on the platform. People find value, people stay. Easy as.

They've also stressed their fight against misleading content. In fact, in April 2019 the platform elaborated on its efforts to fact-check content, using manual moderators. This highlights the need for transparency in your Facebook content, so as a marketer you'll need to play by the rules too. That means nothing controversial or spammy. 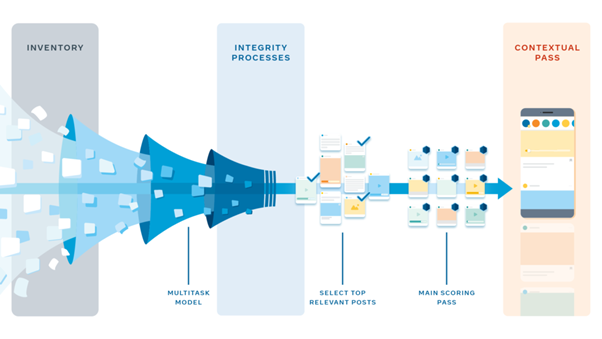 “These changes aren’t meant to show more or less from Pages or friends. Rather, the Page links that are surfaced to people will be ones they find worth their time — and the friend posts will be from friends people want to hear from most.” said the company.

So this means avoid spam, engage likes. Any forms of engagement, such as likes, comments, reactions, are all valuable for brands who want to be processed as relevant to their followers.

Let's have a quick look into the four factors that determine whether a story is relevant for a user's feed:

Facebook has now introduced options for users to manually change their experience of the platform, so they're no longer fully reliant on the all-knowing algorithm. These include:

Facebook has hinted that every interaction and behaviour on its site counts with shaping the news feed. Although, it now provides users with control over who can comment on public posts; public, friends, profiles, and 'pages you mention'.

This means users have explicit control over who is able to comment on your public posts, and limits unwanted interactions.

Facebook is also giving users more control over what they see in their news feed. They provide a feed filter bar, for three alternate feed options; home (the standard algorithm-tuned feed), favourites (posts from your hand-picked 30 people or pages), and recent (the algorithm-free chronological news feed).

3. Context on why posts appear

Facebook, in order to help users discover new and relevant content, will suggest posts from posts from groups or pages they don't follow. Facebook will now provide more context around why users are seeing these posts by expanding the "Why am I seeing this post?" feature.

Facebook is beginning to prioritise posts in groups and events. Named as the two biggest reasons people visit the platform every day, there is now more emphasis on promoting these.

The social media giant has implemented recommended tag listings for when a user is composing a post. It's still in beta, but might be a way to gain a bigger reach.

What do these changes mean for marketers?

When it comes to earning more reach, the algorithm will reward marketers for posting content that people engage with.

One of the changes involves how videos are ranked. Facebook has been placing even more emphasis on loyalty, intent, and viewing durations since the video ranking updates. These require video creators to focus on:

What should marketers avoid with the new algorithm?

The algorithm has seemingly caught on with "engagement-bating" content. This is a technique for artificially increasing content rankings, using content that basically tricks an audience into interacting. Clickbait is the most famous example of this, but it can also include: 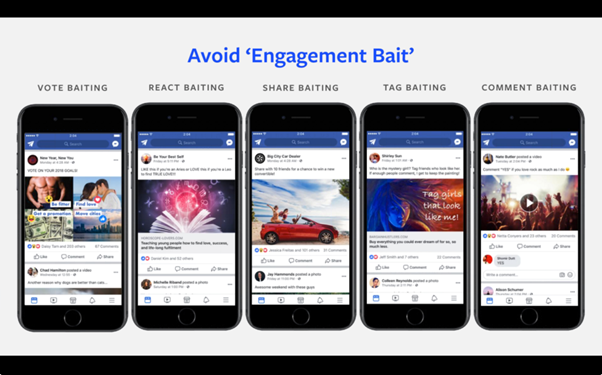 This handy graph from CoSchedule shows the ideal times for content publishing for each industry: 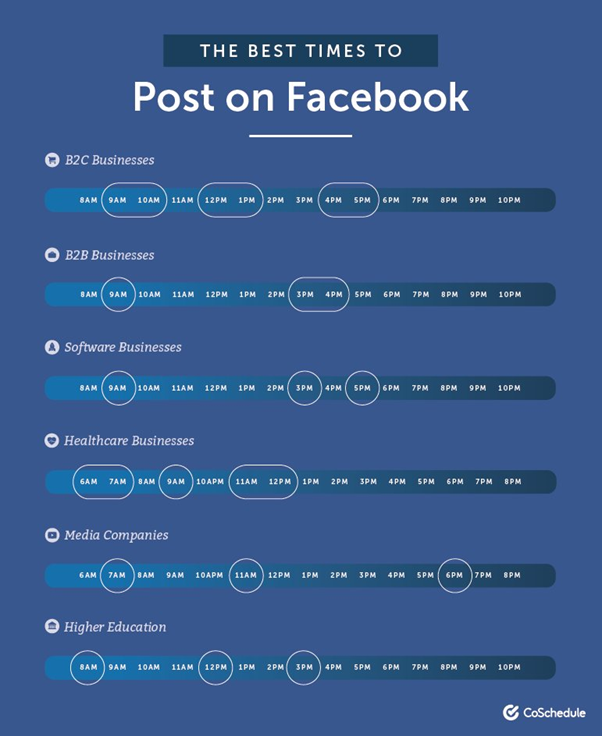 Basically, the algorithm prioritises content with high engagement. So, how can you guarantee that? Well, by posting when your audience is online and active, of course. You can check with tools like Hootsuite to see when your target viewers are most active.

Also, brands which post consistently are more likely to get are also likely to get better engagement. I mean, it is a numbers game, after all. Facebook's algorithm also rewards recency. All of this can be set out in a nice, neat content calendar, so you have everything ready to go, when its needed.

Like we've been through before, video can be pretty impactful on Facebook, when done right. Video content has become more and more popular in the last few years. In fact, video is 600% more effective than print and direct mail combined, and 1200% times more likely to be shared than links and text combined, according to Forrester.

Plus, 51.9% of marketing professionals worldwide name video as the type of content with the best ROI.

So, follow the steps above to create the best video content you can, and reap the rewards.

Gone are the days when you could shoot out a post, and hope for the best, and see that organic reach grow. Now, it's become vital that you spend time engaging with your audience. Reply to their comments and messages, in order to grow this engagement, and foster a relationship.

Remember, the algorithm prioritises content shared by friends and family, so focus on this. You'll want to create a brand and content that your audience wants their connections to see. Engagement and sharing will make it visible to their friends and family.

Another way to do this is to post content that causes engagement between members of your audience. If you create posts that encourage conversations, the algorithm will use "action-bumping logic" to push these posts among a user's audience.

Another way to foster community, connection, and conversation is to create a Facebook group. The Facebook algorithm pushes posts from groups a user interacts with most, so posting conversation starters in your group is an easy way to attract more views.

Basically, this means utilising your employees to share and engage with your content, so you'll stand out on other users' news feeds.

Facebook, as we've mentioned, prioritises content from people users know personally, so if ask your employees to publish and share your content, it'll reach the newsfeeds of their networks. People are 16X more likely to read content from friends and family, over a brand. Plus, you'll be building brand awareness across this network, too.

Ignore the algorithm, and use stories. This feature is a sneaky way to bypass the algorithm's restraints, as they aren't part of the newsfeed.

Stories also get 500 million daily viewers, so can be very effective at driving engagement and brand awareness. So, you can boost organic reach, without having to battle for survival in the algorithm.

Facebook Live video is another way of using Facebook's own tools against 'em. Live video has that element of authenticity and intimacy that customers love. It's the reason that Facebook Live gets 6x more engagement than standard videos.

The algorithm will show Live broadcasts to a large number of standard viewers, as well as users with similar interests and behaviours.

So, it's come to this. Unfortunately true organic reach is pretty difficult, even with algorithm-beating hacks. Many of the best Facebook marketing strategies will support their organic reach with ad spend, utilising tips like the ones above whilst giving them a little bit of a monetary boost.

Organic reach stats will let you know what your client base really wants, and then you can boost these posts to expand its reach, both with your audience and potential audience.