How the Low Code/ No Code Movement Helps Marketers

Forget the traditional image of the computer programmer typing at 100 miles an hour, tapping out streams of neon green code, to finally exclaim "I'm in". You, instead, are the rugged ex-military super spy in a leather jacket, spitting back "In English, Goddammit!" Much, much cooler.

So, let's jump into why you've been hearing the words "low-code/no-code" so frequently from marketers. Well:

…and what's the difference between the two, I hear you ask?

Both the low-code and no-code landscape is complex, with multiple platforms, submarkets and solutions. Just take a look at Gartner's Magic Quadrant for enterprise low-code platforms:

So, in an era where digital transformation and innovation play a critical role in organisational growth, the speed, accessibility, and automation that low-code and no-code can provide can mean the difference between being at the front and the back of the pack.

But, let's take a deeper look.

This means non-developers from HR, marketing, and ops teams can deploy successful and impactful software applications quickly. Plus, it's not just about deployment. These teams can also maintain the software - no need for hours waiting around for an engineer.

It's all about lowering the technical barriers between teams.

It's not just citizen engineers who can benefit, oh no. According to Shiven Ramji, chief product officer for Auth0:

“Giving more teams the autonomy to contribute to app development with low code and no code saves valuable resources, and will continue to lower the barrier to entry for building stellar apps,”

So, it's no surprise low-code and no-code tools, which some dismissed as a 'trend' a few years ago, have been adopted rapidly across multiple industries. 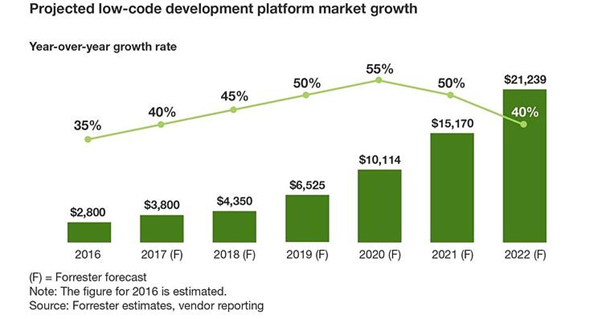 Now that companies find themselves in the middle of a "developer drought", recruiting effective software solutions is vital. So, businesses are seeing their way out of this conundrum with low-code/no-code solutions. Let's have a look into some more benefits.

Speed is another benefit of the no-code/low-code approach.

"Digital transformation has been a high priority for years but the COVID pandemic took the importance of digital transformation to a new level," said Josh Kahn, senior vice president of creator workflow products at ServiceNow. "The speed at which companies need to deliver new applications to digitize business processes has never been faster.”

Low code also helps speed up the delivery of apps in a couple of different ways. This can include IT developers using low-code tools to generate the simple parts, so they can spend their time on coding. Another way can mean moving the app development beyond the, often overworked, IT development organisation.

Historically, only a small percentage of people were able to create software.

"We are seeing adoption of low-code across many different job titles, from people with obvious adjacent skill sets like data analysts and electrical engineers to perhaps more surprising roles like attorneys and underwriters," says Sheryl Koenigsberg, head of global product marketing at Mendix.

"People with this kind of very specific domain expertise can meaningfully contribute to the delivery of software.  Not only are they able to create their own workgroup apps for things like forms and simple workflows, but they can also co-create enterprise solutions alongside professional developers.  As we discussed previously, our platform's thoughtful governance model allows for this type of work, which is otherwise difficult to foster."

On top of branching the developer gap, and overcoming the drought, low/no code can also help solve work-group level problems, by the work-group themselves. But, according to Sheryl:

""IT departments are trying to balance two things. On one side, they see a growing interest from business experts to solve their own workgroup-level problems themselves.  On the other hand, they want to maintain control and governance over any software created in the organization."

With low-code and no-code, IT departments can also give business units skill-appropriate tools to solve some of their own problems, but they can also assure anything they build themselves goes through a centralised process. This means the ability to check for quality and security, without losing the convenience.

Now, this can mean time and money.

It's important to remove barriers, especially with the constantly changing needs and habits of customers, battling with tighter budgets.

The ability to write less code, and still do a great job, is an effective and self-service model which saves marketers' and customers' time.

It means teams can direct their attention to less automated processes, while customers can save time they would typically spend waiting around for new software solutions.

“This model is also great for non-developers to implement and ensures that customers (whether fellow developers or even someone on a marketing operations or web team) can easily integrate new tools and software into their existing solutions," says Matt Pillar, VP of engineering at OneSignal.

"This is not only critical for those without a more technical background, but also valuable for time-strapped product teams who want to buy vs. build a new feature.”

In the past, teams took the enterprise-level tools at their disposal and found ways to create workflows that fit the tool, rather than their team's needs.

Ari Rule gives the example of a team's content strategy.

Developing a content strategy is recognised as a valuable practise for any marketing team, but isn't readily adopted. One reason this could be is that the usual tools marketing teams have, to create and publish content, takes up a lot of precious time.

Switching to a low-code or no-code CMS that employs a fresher content architecture quickly simplifies the idea-to-deployment process. This means more automation, faster updates, and scalability.

Instead of waiting around for a developer to put an idea into action, a team could wireframe, test, tweak, and launch the new page themselves, slimming down the timeline.

"Some platforms, like GoDaddy Website Builder, include templates populated with professional text and images created for hundreds of specific industries," says Ari.

"This content can work as-is for some clients or, for others, let them see the direction their content needs to take."

This means less stress and strain, and fewer distractions from the bigger tasks and bigger picture. Plus, it reduces the possibility that your team will face burn-out, through the ability to be more productive with less effort.

No to No-code? Feeling Low with Low-code?

With every positive, there must be some negatives, right? Well, let's not call them negatives, instead let's deem them 'challenges'. I mean, we're marketers, right? We should know all about the power of branding. So, let's look into some challenges of low-code/no-code, starting with: