The Spanish Flu of 1918 was a hugely destructive global phenomenon that infected a third of the world’s population and led to the death of an estimated 500 million people at the end of the First World War. Despite the lack of data regarding the economic consequence of a World War combined with a global pandemic, trawling through newspapers of the time suggests that businesses were extremely badly hit. It is not hard to imagine the difficulty many societies around the world would have faced in 1918.

While it was clearly a traumatic time for many, it is important to remember that the adult survivors of the first World War would have also lived through the Second Industrial Revolution that was abruptly brought to a halt by the onset of war. Many new and wondrous technologies were available again for public consumption now that the war had ended. Charlie Chaplin’s “Shoulder Arms” was amongst hundreds of new films shown in the cinema in 1918, Kodak Eastman was the dominant camera manufacturer of the time and telephones were being sold to households en masse. Despite many living with the equivalence of social distancing at the time, the technology available meant that people could still remain connected and informed despite the isolation that the pandemic brought with it. 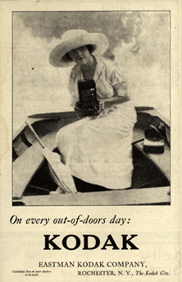 When I looked back at some of the advertising of the time, it is hard not to observe the similarities in the human experience that would have been felt by our ancestors a century ago. Kodak, even then, was connecting the camera with social activity - that a photograph is a way to document and share human experience. While the headline “On every out-of-doors day” isn’t quite as catchy as the latter day “Kodak moments” you can see how Kodak understood that the basis of any successful marketing communication is by creating a human connection where the product is but a conduit. 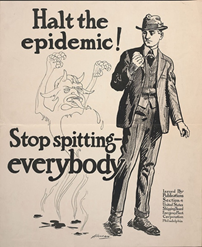 As Marketers, we also know that fear can be a powerful way to drive behaviour and should be used sparingly. The public message advertisement by the United States Shipping Board Emergency Fleet, depicting the image of a devilish creature emanating from the spit of a rather well dressed man coupled with the headline “Halt the epidemic! Stop spitting – everybody” is hardly subtle but no doubt effective. In fairness, the sight of spitting recreational runners during my rare ventures outside do make my skin crawl. I am seriously considering making this classic advertisement into a T-Shirt.

And finally, I couldn’t ignore this advertisement from Roanoke Cycle Company as it speaks so strongly to me through the passage of time. “Ride a bicycle and keep well” is a message that could well have been written today. Riding my bicycle through the English Garden here in Munich before I start work for the day has been an important way for me to retain perspective and (a semblance) of health. And for those of you who have tried to buy a child’s bicycle recently will be acutely aware of the global shortage we are experiencing right now. I have spoken to friends and colleagues in the USA, UK and Australia who all confirm the same experience I have found in Germany – that a child’s bicycle is now a rare commodity that money cannot buy.

The need to find betterment for ourselves and our loved ones touches upon some of our most basic human instincts. Looking back through the lens of time at what marketers were communicating to consumers then, reminds us that the human experience has not changed all that much. Their technology of the time would have been exciting and vital, just as ours is to us today. Yet, what remains most important is not the technology at our disposal, but rather, what we communicate as humans to other humans. Enriching the lives of other people, and not merely selling to customers is what has always mattered most to those of us who truly value the power of marketing.

This story is contributed from our audience, if you'd like to have your say and get published on our site, get in touch at hello@martechalliance.com