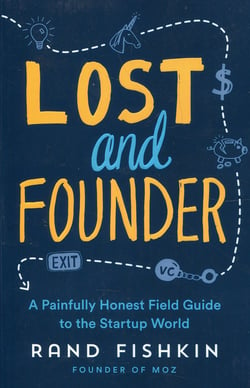 Rand Fishkin gives prospective entrepreneurs a peek behind the curtain of what it really  is like to build a start up.

Rand himself is the current founder of SparkToro, and has plenty of industry weight to throw around.

This quintessential startup guide details the good, as well as the bad times that can occur when launching your own company.

Rand gifts his readers with valuable life lessons, providing them with not only essential takeaways for how to run a successful company, but a successful life as well.

From his employees and customers to his own family, taking care of others is always at the top of Rand's agenda.

Empathy shines through this book, where he teaches us about the care that goes into being a founder as well as the profit. In this episode, we got the chance to chat with Rand Fishkin, the quintessential founder, SEO master and author of Lost and Founder We couldn't resist hearing more about his departure from Moz last year and his recent project, SparkToro.

Rand founded his first business back in 2003, and has now 4 startup projects under his belt. He is now the founder of SparkToro, recently moving into new offices (a converted tool shed behind his house).

With his time stretched between SparkToro projects, keynote speech appearances, and keeping up with his blog, there aren't many 'ordinary' days for Rand.

Above all, Rand was eager to share the personality behind being a founder. Beyond the figures and the media appearances, Rand is candor about his stubbornness and confessed more than a few regrets- particularly his decision to step down as CEO at Moz.

Check out the interview here: