#MarTechFest Dial Up: Joe Pulizzi and Robert Rose's 2021 in Review

Missed #MarTechFest Dial Up with content kings Joe Pulizzi and Robert Rose? Well then, this one's for you. They might have a duo name like a 70s police detective show, but they're far more cool. No flares to be seen. 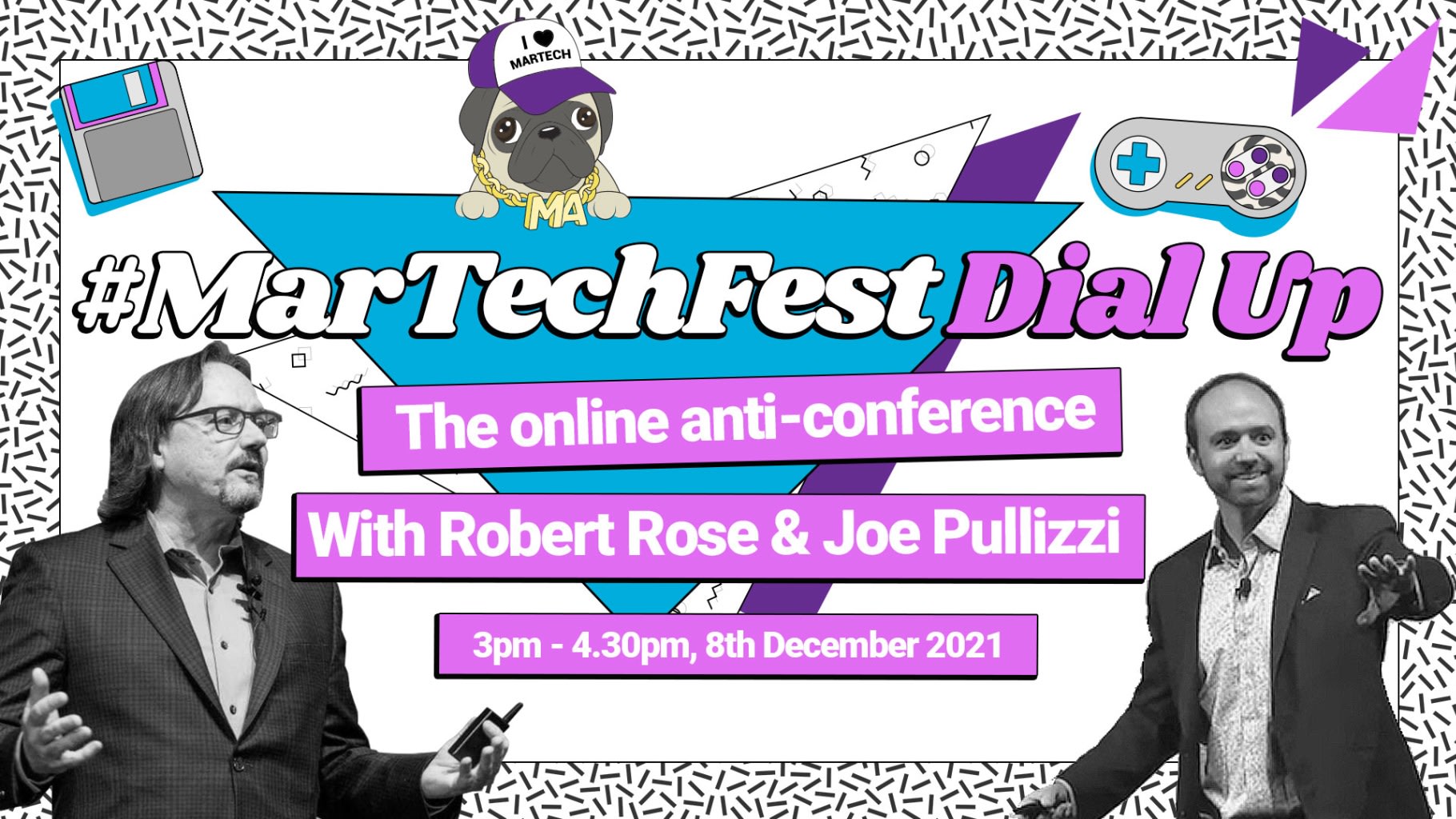 So, 2022. But before we jump head first into the next year, it's important to know what has changed in the past year. Got to understand the past before you understand the future, right? So, let's ask: what changed, what will continue to change, and what changes were purely situational?

Joe starts. He saw acquisitions, made by B2C media companies in the last 12 months, but with the amount of worldwide companies that were flushed with cash, it was the rarity of these acquisitions which Joe considers a "failure". This was a year with plenty of opportunities, that weren't taken, especially in the consumer side.

'21 was set up perfectly for enterprises, they had all this cash...they want to build these audiences, but don't want to go through the 12-18 months to do that. So let's just go out and buy them"

Robert notes that the lack of big failures which indicates the lack of risk-taking. There's usually a case of someone falling flat on their face. But instead, 2021 has been an example of what Rob calls "check the box marketing" - companies have been so scared of failure, they've refused any creativity that comes from risk.

It's all been 'unprecedented times' this 'we're here for you' that. Which, according to Robert, was going to fail anyway. If you get in front of a customer and wax lyrical about your story, and your caring community, it's an empty gesture. "It's a waste, for me, I believe."

But he points to one failure specifically – the Clubhouse marketing strategy. He believes it’s a failure from a marketing strategy, as they missed out on driving what social audio is now. It's put them at a disadvantage for becoming a leader in that space early on.

This is a space where they clash.

“Clubhouse was not expecting to grow as quickly as they did, this is nothing about marketing”, claims Joe.

Robert disagrees. “But it is!”

But Joe believes Clubhouse, as a niche platform, is going to be just fine. There's creators - active creators and marketers - that are committed to the platform and the concept, and who are doing just fine.

“The problem is – this is where most marketers fail – they go in there and just dabble with it," he says.

Then, it doesn't work out, or they find out it requires a lot of training and learning to get right. So, they don't commit. But this is not specific to Clubhouse.

Shiny-thing syndrome applies to every other platform, too. Some marketers dabble in everything, and commit to nothing. So, Clubhouse will work well for companies committed to it.

The question for Joe is, instead, whether social audio is becoming a "thing".

“Am I putting dollars into it? The answer is absolutely yes. I would like to see more of this happening.

So, what would Robert have done differently to grow Clubhouse into an audio juggernaut?

Well, first up, they haven't read Innovator's Dilemma, which would've been a really interesting template to follow, says Rob.

The Innovator's Dilemma: When New Technologies Cause Great Firms to Fail, published in 1997, is the work of Harvard professor and businessman Clayton Christensen. It expands on the concept of disruptive technologies.

The two key parts to the dilemma include number one: value to innovation as an S-curve, i.e. improving a product takes time and many iterations. Number two: Incumbent sized deals. The incumbent has the luxury of a huge customer set, but high expectations of yearly sales. Next gen inventions find niches away from this, to build the 'new product'. So, the new companies don't require these yearly sales, and have more time to focus on this smaller venture.

So, how should it have played out?

"Don’t talk about how pressured you are to open it up to the world…remember, the name of the platform when they first started was ‘talk show’.

And it was all about creating a platform where a small number of people could build audiences to become talk shows, to democratise talk shows. And that is an interesting play.”

This way, it becomes a luxury brand, where influencers want to be. For Robert, the approach would've been: don’t rush, build the mystique, make it a red-carpet event. And then a year from now, two years from now, open it up. But that lost mystique was the app's selling point.

Joe and Robert on...where marketers should be playing

For Joe, the key part in choosing your platforms and channels requires strategy.

Some enterprises are playing everywhere. But what they end up seeing is a 'jack of all trades, master of none' outcome. It's what Doug Kessler calls a "mountain of meh".

With this spray and pray approach, marketers are unable to build an audience. So, they have to choose. Maybe combine a newsletter and a podcast. A YouTube channel and a Twitch stream.

“Say no to lots of things, say yes – a big yes – and invest in a couple of things really well," advises Joe.

What does Robert think? Well:

He thinks brands should weigh heavily into other areas. Organic building on social platforms has arguably been dead for a while.

“It's not terribly productive, especially for beginning of the journey efforts.” He expects to see brands, like Lush has done already, turn off their social media, or at least stop posting, as Facebook continues with its “troubles”, as he calls it.

These platforms have risen as high as they can go. Marketers have had the opportunity to own some of these channels, and build communities, but now users are fatigued, especially those who create.

Think the mass exodus of YouTubers to Twitch in recent years. In fact, these creator's homes have not been social platforms in quite some time.

Robert agrees. We've seen creators building their own little communities away from the all-controlling hands of social giants. R hears they've been asking:

"Why are we building their audience, and not ours? People are sick of living in the halo of Facebook's trust."

Joe's differentiation of Web 3.0 to the other iterations involves the focus on digital ownership.

Owning, in this case means tokenisation. Users will be able to own content, rather than just consuming it, providing extra, interactive, engaging value, with the power to earn placed in the hands of their favourite creators. Think NFTs, think Creator Coins.

Robert focuses on rebuking the idea of branding this 'a trend'. He suggests, at the moment, we'll be seeing some sort of Tulip Mania - a term used to describe people investing huge amounts speculatively, because of positive sentiments around that specific thing. People went mad for tulips in the 17th century Netherlands, apparently

But the technology, and the co-creation tech, which gives customers a voice in what's being created is far from this. It might be hosting a fad for now, but the backbone of this tech is what counts.

Robert gives the example of Lego. The toy company understands its community - community, not customers - on board through their ability to co-create products. They can go online to propose, and vote on, what product is bought into the market place.

For Joe, the idea of tokenisation can mean being able to co-own, co-create, or co-experience, through content, products, or loyalty. So, the tech of blockchain, and tokens, will shift and provide for the next level of what opt-in really means.

For Robert, personalisation is the sexiest thing no one is doing. But if you're questioning whether or not you can do it, you really should be instead thinking about whether or not whether you should do it.

Basically, to do personalisation, you must do it well, with the proper foundations.

Personalisation has barely evolved from just adding someone's name onto a piece of direct mail. What people want is personal content, targeted, dynamically generated content. But without being creepy.

So how do we get to a sense of targeting content, to that person, in their own time?

Well, number one: marketers need a great structured content repository. Number two: they have to get the first party data to understand where that customer is, and what they need.

Do the guys expect this trend to continue? Well, when asked "Do you think this’ll catch up in 2022?”,  Joe answers “I though this was going to catch up six years ago.”

"To answer your question: Everyone’s a tech company now, or at least they think they are. At the same time, everyone's a media company. At least our process is.”

Basically, if you look at most marketing departments today, they should be looking awfully similar to media companies.

Hubspot has been doing this for a long time, especially when we saw their acquisition of The Hustle.

Joe thinks, because of the abundance of cash, and lack of patience, we’ll be seeing less audience building, more buying. And there are a lot of media platforms to buy.

“Whatever your industry is, there’s a blogger, a podcaster, a youtuber, a twitch streamer that is available for sale. Right now. At whatever price.”

We think of a B2C company and a media company as different, but if you look at the marketing behind it, this is “just a perception. We’re all doing the same thing”.

Plus, the marketing department itself should be a “profit centre”.

For Robert, it's a case of looking at what’s happened in the recent past. What we're seeing is that a lot of the audience building has become just as important as products and services. It's all about becoming multi-revenue generating.

Then, it’s a question of building or buying your content studio or media company. As a result, media operations are becoming an incredibly important part of marketing strategy.

Joe and Robert on...2022 thoughts and predictions

For Joe: “the metaverse is a thing”.

There’s a whole movement around digital property. Communities are being built up, and brands are buying out property. It's likely you’ll soon have someone on your team focused on tokenisation and web 3, and what experiences your company is going to offer there.

For Robert: it's about one word - de-centralisation.

Hate to miss out? Well, you can catch the entire sesh on demand, right here! 👈