"QR Codes?!" I hear you say. "Bringing back QR Codes?! What's next, fax machines? LaserDisc? Dot-matrix impact printing?!" C'mon, now. They said the exact same thing about vinyl, and millennial hipsters bought that back just so they could show off to their barista friends. So, hear me out.

In our age of data, what's more useful than a simple, visually appealing code that connects people directly to sources of information? I mean, it's in the name - Quick Response.

This 2-D barcode was developed in Japan in 1994, and was used in the automotive industry. It gained a bit of popularity in the 2000s, but went gently into that good night, remaining dormant for the past decade.

But during a June 2021 survey, it was found that 45% of responding shoppers stated that they had used a marketing-related QR code in the last three months.

Plus, it has been projected that more than 11 million American households will scan QR codes by the end of this year.

So, what's different? I mean it is the same technology. Why has it suddenly grown in popularity, and within such a small space of time? Well, I'll tell you. But be patient, because first we have to look into how the tech works, before we can figure out why it works.

How do QR codes work?

A QR code is a matrix barcode, also known as a two dimensional barcode, that can hold more information than traditional barcodes.

Using the camera app, or Google image search, smartphone users can scan the code to access the information they contain. Plus, the code can be scanned both horizontally and vertically.

Each of these parts has a specific purpose that presents a certain piece of information through the code, such as the print direction, timing, error tolerance, and empty spaces (which differentiates the code from its surroundings). All of these puzzle pieces come together to create a single code.

So, it's a pretty cool and versatile technology. But, outside some initial futurist enthusiasm at the beginning, it was unappreciated in its time.

Despite its benefits, it was rejected by the average consumer outside the initial novelty factor. Some companies in the US and China recognised the potential of QR codes, and maintained their usage of them, including:

QR codes continued to be used, but not as widely as once hoped. The supporting technology wasn't there, often consumers were taken to non-mobile optimised sites, or a broken link. Plus, not everyone had a smartphone. But times have changed. And you have three main things to thank for the prevalence of these fun lil' squares: Number one: smartphones. Number two: Apple. And Number three: a little thing called Covid.

1. QR codes became easy to use

So, back in the day, QR codes looked cool. They were on posters, and bus stops, and they were just nice to look at. I mean, quite a lot of the time your phone didn't have the technology to scan them, so they were just fun pieces of modern art, really.  You just had to imagine what cool information they had hidden beneath all those little black squares.

Part of the reason why QR codes didn't catch on after the 2000s was for this exact experience. When it was first starting to be widely used, there was a high barrier of entry. Namely, not that many people had smartphones to begin with, and those who did had to download a third-party app to read the codes. So, basically defeating the point of a 'quick response' code, really.

But in 2020, 81% of U.S adults have smartphones. I mean, just whip out your smartphone now, and have a look at this very serious, very informative article: 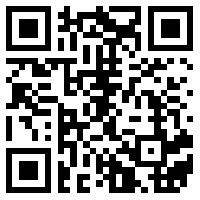 With the IOS 11 update in 2017, all iPhones gained the ability to read QR codes without the need for a third party app. Instead, all they'd have to do is access the native camera application, scan the QR code, click the notification, and be taken to the QR code link.

Lauren Foye, a Juniper Researcher, sees this as the kickstart to the QR code. “Apple’s addition of QR code reading facilities directly addresses a major barrier for use in western markets. The lack of an in-built reader has been a hindrance, with consumers needing to download a separate QR code scanner app”

Foye’s report predicted the growth will continue: “Juniper therefore believes that QR codes could see a rapid increase in nations outside of Asia, as more consumers have streamlined access to them.”

"WeChat—which is predominantly used in China—made the nation obsessed with QR Codes in the last few years," according to Scanova.io.

"The Chinese scan QR codes to make payments, get information, authenticate themselves, avail offers and practically every other use case."

In fact, 36% of respondents say they have used QR codes as a payment method, with 53% saying they will in the future.

But with the pandemic, there was a shift globally, bringing all countries up to speed with touchless solutions.

Restaurants and pubs all round the world have put away their physical menus, and replaced them with a small QR code at the end of the table. This might be alongside the venue's WiFi QR code, too. 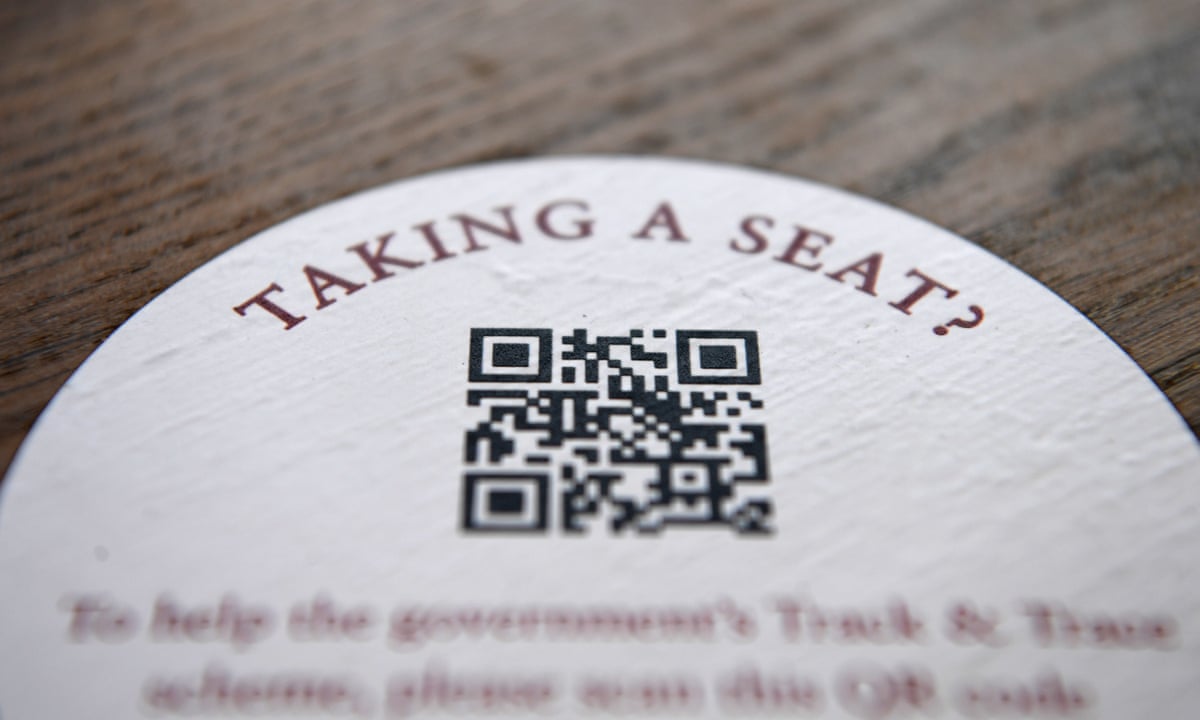 The codes have also been to help with the Covid track and trace programme. Basically, it's been all about reducing the risk of human-to-human infection. It doesn't hurt that they also provide a level of convenience and speed to which customers have now become accustomed.

QR codes have also been used for mobile ticketing, reducing not only this human-to-human infection, but also paper waste. Consumers just present their phone, and gain entrance into the event.

In-person retail has also benefited, with companies like Amazon bringing QR into new and innovative business models. Without the tech, Amazon Go would struggle to provide the ease and convenience that comes with the promise of their new stores.

Shoppers scan the QR code upon entering the store, and any items they leave with are charged to their Amazon account automatically, with no need for checkout. So, a nice role reversal - QR has been waiting around for tech to support it, and is now supporting innovative ideas and progressions. I'm proud of it 😭. 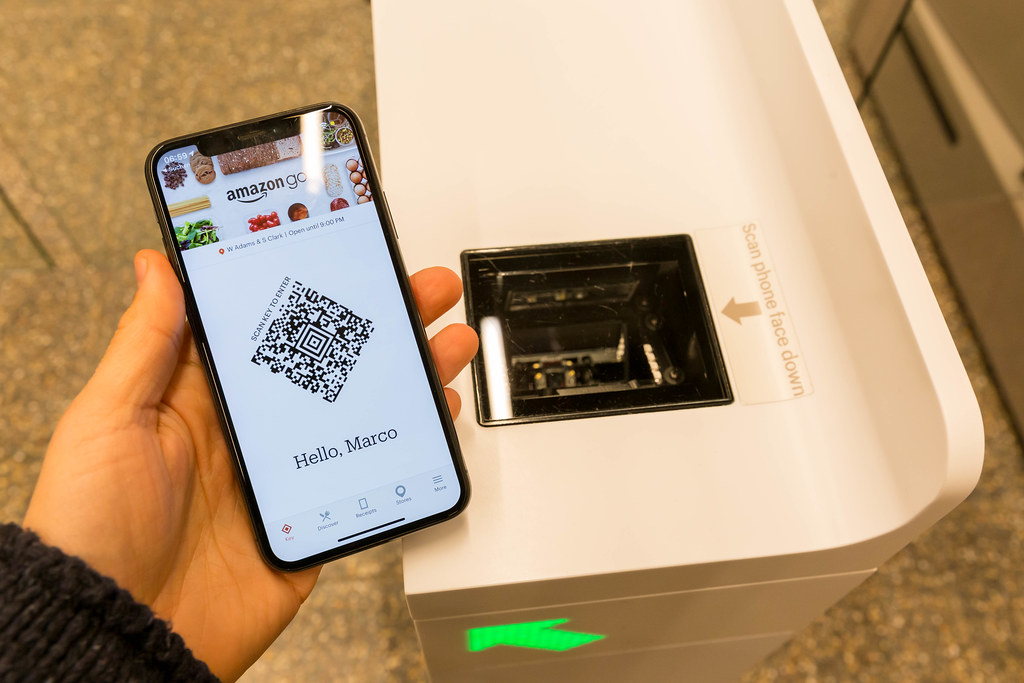 How have marketers been using QR codes in the last few years?

QR codes can be incorporated into a bunch of marketing campaigns. They add a lil extra spice to the whole thing, including allowing you to:

Let's have a look at how Jamba Juice has done it. The smoothie/fruit juice chain has used the tech to not only build its email database, but drive user engagement.

The company placed QR codes on its in-store signage, encouraging customers to scan the strawberry-shaped codes in order to opt-in to receiving exclusive offers and discounts by becoming an insider - the business' loyalty card programme. 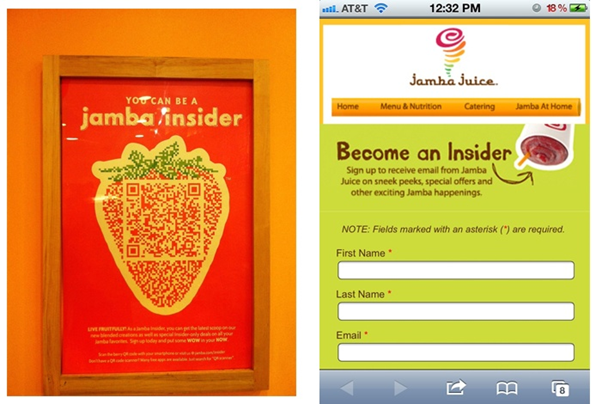 When the consumer scans the code, they are taken to the mobile-optimised company site, where they can sign up. This encourages users to enter their info, such as name and email, so the company can learn more about their client base, and provide personalised experiences and better targeting in the future.

Companies like Sky Media have been introducing QR codes to TV ads that allow users to respond directly to the campaign. The retailer can promote an exclusive offer during ad breaks, and have their engaged audience scan the code, and react immediately to the promotion.

Sky media has developed measurement capabilities that mean that retailers can link metrics directly to these QR based campaigns, linking their sales with viewing data.

Sarah Jones, director of planning at Sky, states that the evidence shows QR codes give a 30% higher response rate than industry benchmarks for digital ads.

"Having a successful “shoppable ads” offer would enable Sky to better compete with Facebook and Google and capture more spend in the booming ecommerce market, as well as more “long-tail” ad spend from newer companies or direct-to-consumer brands that want more direct-response advertising as opposed to brand-building spots," says Omar Oakes of Campaignlive.co.uk.

Advertisers don't have to sacrifice their brand image by slapping on a huge black-and-white QR code to all their online and offline creatives. Instead, many companies have been experimenting with the look of their codes, in order to catch the eye of consumers. 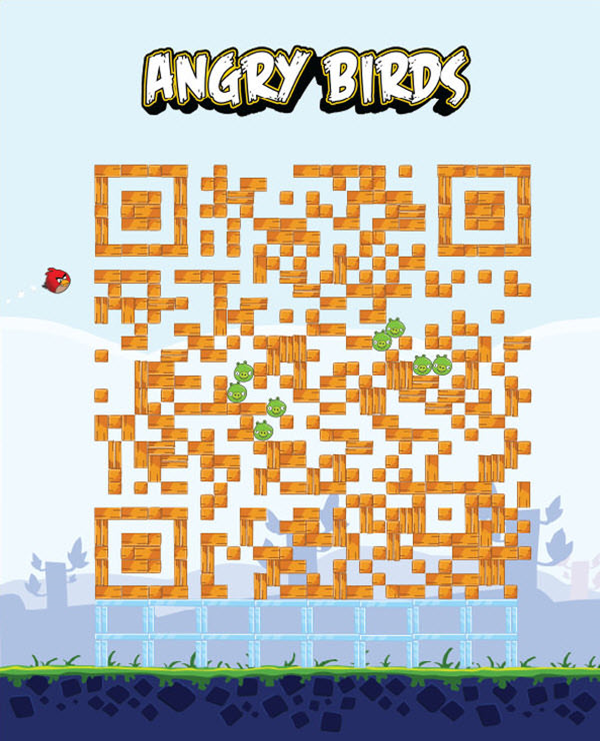 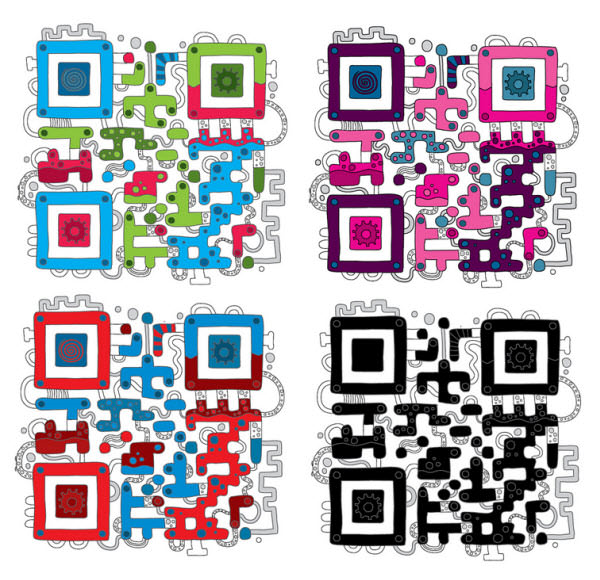 So, should you use QR codes?

Well, they are making a comeback after all. But just like with any piece of shiny new/old tech, marketers shouldn't get too excited, spend their entire budget, and go back to their company empty handed.

QR tools can be a really good tool for communication with, and engaging, your customers. But you've got to make sure that's exactly what they're doing. Make sure they're enhancing the customer experience, and not just getting in the way.

The code should link to something useful, or something of value. And most importantly, they should be functional; think mobile optimisation, think a visually appealing landing page, think no broken links. And remember, a QR code without a call-to-action is a wasted opportunity.