The Big Tech Execs get a grilling from the Antitrust Hearing 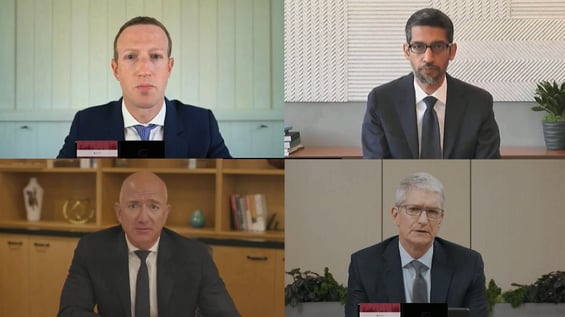 The core accusations came from the concerns of Facebook illegally maintaining a monopoly in social networking by killing off competitors through its acquisitions, Google’s antitrust violations in online advertising, Amazon’s abuse of power over smaller sellers in Amazon Marketplace and Apple’s power and percentage cuts from apps in the App Store.

Facebook CEO and co-founder, Mark Zuckerberg received the toughest grilling of all the Tech Moguls. The primary focus of the allegations questioned whether Facebook illegally maintained exclusive control over the social media market by sustaining improper conduct with competitors.

Essentially, Zuckerberg was accused of “killing off competition” by threatening to rip-off the likes of Instagram, WhatsApp and Snapchat if they didn’t sell. U.S. Representative, Pramila Jayapal took no prisoners when questioning Zuckerberg stating that Facebook “copy, acquires and kills competitors”.

“Facebook is developing our own photo strategy so how we engage now will also determine how much we’re partners vs. competitors down the line.”

Systrom reported he saw this interaction as a threat – confiding in an investor at the time – fearing Zuckerberg would go into“destroy mode” if he didn’t sell the app. Zuckerberg, “respectfully disagree[d] with the characterisation.”

Fears surrounding Google’s dominance in the search game reportedly allows the company to control the web traffic of competitors ensuring they rank lower in search results.

Shots were fired when accusations arose from 2010 when Google allegedly stole restaurant reviews from Yelp:

“Our investigation shows that Google’s response [to Yelp’s accusation] was to threaten to de-list Yelp entirely. In other words, let us steal your content, or effectively disappear from the web.” Cicilline had clearly done his homework.

But Pichai kept his cool and didn’t address the allegation directly: “Congressman, just like other businesses we try to understand trends from data, which we can see, and we use it to improve our products for users.”

Amazon CEO (and world’s richest man), Jeff Bezos was next to face the firing line. Bezos’ interrogation addressed the concerns about the power Amazon holds over its 1.7 million small and mid-sized sellers and suspicions over using data to develop competing products.

“Our investigation uncovered documents that show that Amazon sometimes doesn’t play fairly crossing the line from robust competition to predatory pricing to destroy rivals rather than out-compete them.”

Scanlon goes on to delve a little deeper revealing that a few months later, Amazon bought its now struggling competitor and then returned to its increased prices. Scanlon didn’t come to play.

Bezos simply responded “I don't remember that at all... We match competitive prices.”

Apple CEO, Tim Cook miraculously walked away relatively unharmed from congress’ fiery questions. I guess it just goes to show how far keeping it cool, calm and collected can get you. Cook faced his allegations on whether Apple takes too big of a cut from the revenue of third-party app developers sold on the App Store.

When confronted with apps that had been previously removed from the app store, Tim Cook came prepared with the concerns which led to the decision and remained remarkably in control. To come away receiving half the amount of questions as your fellow Tech Giants is a job well done.

For now, all investigations are set to continue. No one has dodged the bullet just yet.