The Fall of Internet Explorer: Where It Lost Out to Rivals

Back in the day of the mid-noughties, if you'd have approached someone at their computer and told them that there was an alternative to Internet Explorer, they would have slapped you.

Internet Explorer kicked off way back in 1994 and by 2003, it had 95% control of the world's web browser usage. It now - although discontinued and to be totally shut down in June of 2022 - has only 0.62% control. Microsoft Edge, its relatively new replacement/reincarnation, has 3.37% control. 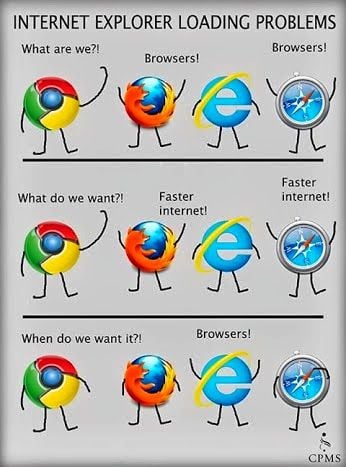 Programmers used to create websites purely based on what Internet Explorer could do. These days, it's Microsoft that has regularly failed  to adhere to the rules set out by the World Wide Web Consortium, the organisation that establishes standards for web technologies.

Granted, the shortcomings of Internet Explorer weren't really known or generally bemoaned until competitors were released, but Microsoft never did enough to make sure that the competitors never seemed like a more attractive proposition to their own.

In 2004, the first Firefox browser was released by Mozilla, and four years later, Google released Chrome, which became an instant hit.

Ultimately, Microsoft's biggest flaw was hubris. The point blank refusal to adhere to the World Wide Web Consortium guidelines made web pages look warped and different than when they showed on the compliant browsers like Firefox and Chrome.

On top of that, Internet Explorer was very rarely updated . In the decade after Chrome's release, Google updated its native browser 70 times. That's a lot of improvements. In that very same period Microsoft updated Internet Explorer four times.

I hate to cast aspersions, but that's rubbish. The arrogance to think software needed updating just four times in ten years is mind-boggling. You'll know yourself that your standard Chrome or Firefox browser will constantly be offering updates; meanwhile, Internet Explorer is only updated as part of major releases. "Here's Internet Explorer 7. Now deal with that for 3 years!"

Microsoft's marketing was also substandard/non-existent. While Chrome was advertising its Incognito tool and cross-platform functionalities with ridiculously sentimental adverts, Firefox was busy becoming every nerd's favourite browser, with security and tech superiority.

All the while, Internet Explorer was just... existing.

As mentioned, Google really went in hard on its cross-platform tools, showing real-life stories of people starting global businesses all through the help of Gmail, Google search, Google Maps and Shopping and YouTube all in one place.

Microsoft's brand of advertising for Internet Explorer is that it came as the standard browser for Windows PCs, which the United States and the European Union have since claimed was to the detriment of fair browser competition.

Although Microsoft announced Edge is the replacement for Internet Explorer in 2015, it was all too late as people had made the switch to Chrome, Safari, Firefox and more, and whatever came as standard on their phones.

The last point is particularly important, as since March of 2021, mobile browsing overtook desktop browsing for the first time ever.

It's fair to say that Microsoft never got a hold of the mobile market for a number of reasons. Primarily, Windows Phone failed miserably and they were the only phones with Internet Explorer and Edge as standard. Meanwhile, Android and Apple phones excelled, with Chrome and Safari respectively being used more than Microsoft could have dreamed of since around 2007.

Even in its infancy, Microsoft Edge was a non-starter. The lack of marketing pretty much saw it fall flat on its face and for those who did use it, they reported unfriendly interfaces and glitches.

This was down to Microsoft still insisting on using its own rendering engine, which developers didn't bother optimising websites for.

Naturally, when a website isn't made for a specific browser, you run into a mountain of technical issues.

Eventually in 2018, Microsoft abandoned their engine and moved Edge onto the Chromium codebase - which you may have guessed was what Google uses for Chrome - and while this did see a slight uptick in use, it did absolutely nothing to dethrone the 65% market share on global browser usage that Google Chrome has.

Internet Explorer was a classic case of thinking it was too big to fail. It may have killed off competition in the 90s from Netscape, but its subsequent lack of competition between then and the mid noughties saw it become idle and lacking innovation. All of this created the perfect environment for newer companies and ideas to emerge and leave Internet Explorer in their wake.

For now, even if and when Edge catches up tech-wise with its competition, it will be too little too late. However, that's not to say that something like this couldn't happen again.

Just as Google dislodged Internet Explorer with superior tech and wonderful marketing, Edge could do the very same to Chrome sometime down the line.

They just need to actually do some marketing this time...