Book Of The Month - Thinking, Fast and Slow

"This is a landmark book in social thought, in the same league as The Wealth of Nations by Adam Smith and The Interpretation of Dreams by Sigmund Freud", says Nassim Nicholas Taleb, essayist, mathematical statistician and aphorist. 21 years old this year, and still a must-have for anyone looking to expand their personal and professional development, Kahneman’s book is a milestone read. 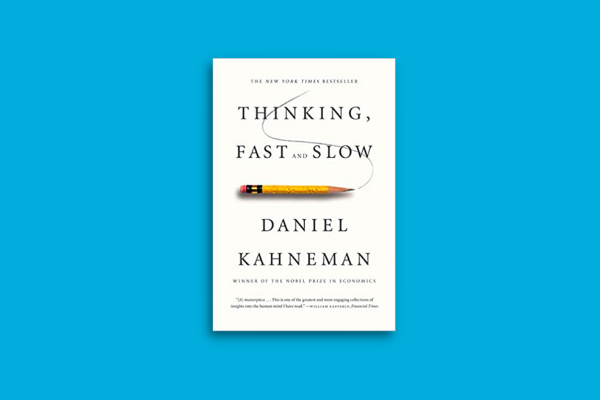 So, obviously, we're going to punctuate the whole thing with a bunch of Simpsons gifs. Strap in.

A psychologist by trade, who managed to win the Nobel Prize for economics, Daniel Kahneman italicised the human aspect of the field by demonstrating systemic biases in the way individuals assess situations, the decisions they make, and how they act on these decisions. Thinking, Fast and Slow is the decades-long cumulation of this research, of the mistakes of our conscious and unconscious thinking, and our evolutionary-instilled overconfidence in our thought patterns.

Apart from me of course. Every decision I make is logical and thought-through. Wait, did I miss the point of the book? I thought it was just talking about everyone else?!

Basically, Kahneman took everything economists thought about human decisions and turned it on its head. No longer were individuals the purely rational thinking beings it was assumed they were. Instead, he saw the flaws in our decision making, and how assumptions otherwise could have massive, wide-reaching societal implications.

So, Thinking, Fast and Slow offers a whole perspective into the human mind, clarifying the irrational decisions we make, which would not be made by a clear-thinking 'rational actor'. Why is there more chance we'll believe something if it's in a bold typeface? Why are judges more likely to deny parole before lunch? Why do we assume a good-looking person will be more competent?

From this, came the distinction of two types of thought: the fast and intuitive System One, and the slower, more logical System Two.

So, what does this all have to do with business? With marketing? With you, the nice but now self-consciously-aware, evolutionary-irrational person reading this? Well:

The distinction, and recognition, of these thinking processes, can change the way individuals understand their judgement and decisions, from the personal to the professional.

This might impact the approach to loss aversion, and overconfidence in corporate strategies, to how we frame risks, and even how we begin to understand how fast thinking impacts the wide stage of the stock market. If we assume every corporate and business decision, impacting tens to millions of people, is made logically when in fact it's being made impulsively and emotionally, what can we do to temper this?

Well, the first step to fixing a problem is admitting you have one, right? So, Kahneman wants us to understand we cannot trust our intuition, and instead tap into the benefits of slow thinking. By twisting away from impulsive thoughts, we can avoid the mental glitches and downfalls that can cause us to stray from thought-out actions.

Readers can take away three lessons from the book; that your mind has two systems, that your brain cuts corners, and that you need to be aware of your mind's downfalls before making big decisions.

Lesson One: Your Mind Has Two-Systems

System One: Quick, and Intuitive.

Apart from its speed and emotional basis, System One can also be defined in its aversion to losses, and inability to do statistics. Bad things tend to influence us far more than good things.

System One is a remnant of our past, and vital for survival. It's the reason you jump away from a loud noise, but it's also the reason you might have a couple more pints than you meant to at the weekend.

So in your day-to-day, System One is responsible for things such as:

On top of this, Kahneman uses heuristics to suggest System One thinking involves using new info with existing patterns or thoughts. For example, a judge limited to heuristic thinking would only be able to think of similar historical cases when presented with a new dispute, rather than considering the unique aspects of that case.

Human beings are always looking for causes, and are too ready to assume a correlation between events. So, we can't really grasp what randomness looks like.

System two is all about self-control. As we've mentioned before, it allows you to deliberately focus your attention. It means you can focus on someone at a loud party, or keep all your attention on that one dog in the park that's wearing a very cute bandana. Oh look, he's catching a frisbee!

This second addition is still relatively new, only really developing in our brains a few thousand years ago. It’s what helps us succeed as modern human beings, rather than just being an orangutan in a nice suit. Our priorities have shifted away from hunting prey and finding shelter, to earning money and making complex decisions.

The only thing is that these two systems don't always get along. They often fight for dominance, and this conflict determines an individual's behaviour and decisions.

In your day-to-day, System Two is responsible for things such as:

Lesson Two: Your Brain is Lazy

Your brain perceives problems as simpler than they are. Often, System One thinks it can handle whatever issue you're facing, but it commonly over-estimates its abilities, and you end up making a mistake. Thanks a lot, System One, you jerk.

So, why would your brain want to do this? Seems wildly ineffective, right? Well, your brain wants to save energy. The law of least effort states that your brain uses the minimum amount of energy for each task it can. So, if System Two thinks it can take a back seat, it will.

But where else will your brain cut corners? In order to be able to avoid these pitfalls, you need to be aware of them. So let's start with:

Basically, this whole book is Kahneman's way of saying "the homo oeconomicus' i.e. the person who acts only on rational thinking, doesn't exist.

So, think about these two scenarios:

Kahneman suggests we have a "pervasive optimistic bias", which "may well be the most significant of the cognitive biases." This bias generates the illusion of control: the illusion that we have substantial control of our lives.

As part of this comes the 'Planning Fallacy', which is the tendency to overestimate benefits and underestimate costs, which is why people begin risky projects.

So, Kahneman explains that humans fail to consider complexity and that their understanding of the world consists of a small and necessarily unrepresentative set of observations.

When the mind makes decisions, it deals primarily with phenomena it has observed already, and rarely considers things it knows to be relevant, but which it does not have information about. On top of this, it remains oblivious to the possibility of unknown phenomena of unknown relevance.

So, the mind does not really account for the role of chance, and falsely assumes that a future event will be similar to a past event.

All these show that System One will try and get involved when it's time to consider big business decisions, especially when it comes to money. This means it's important to consider statistics and probably above all else, and when the numbers move in your favour, act accordingly.

Any book which rethinks the entirety of human behaviour is bound to shake up the world, be it “The Wealth of Nations by Adam Smith or The Interpretation of Dreams by Sigmund Freud,” as Taleb referenced.

But Kahneman’s work doesn’t just change how we see our own internal perspective, it details why that outlook, and the decisions stemming from it, can change society. From work, to business, to the economy, all parts of our daily lives on a micro and macro scale can be disrupted by one thing: a mind that does a lot, to do little. But what Kahneman's work offers is not an explanation, or an excuse for our behaviour. Instead, he presents something more valuable. He offers an alternative.