In the left corner, standing at 0 foot, 0 inches, 0lbs. He's the big O, the Zero hero, ZERO. PARTY. DAAATA. And in the right corner, with the same measurements, he's number one. It's FIRST PARTY DATA.

And in the other left corner...there's second party data? Wait, how big is this fight? There's third party data too?! This is going to be a bloodbath.

41% of marketers say digital media activation will be the area most impacted by the rise of privacy-related data restriction. This comes ahead of web analytics, digital media measurement, and direct marketing activation.

Recently, it was revealed that 96% of US users opted out of app tracking in the iOS 14.5 update, where it enforced a policy called App Tracking Transparency. This means apps are now required to request user permission to use techniques like ID for advertisers.

So, where should you focus your data-related intentions? What data, when collected, has a good balance of quality, reach, and customer trust? 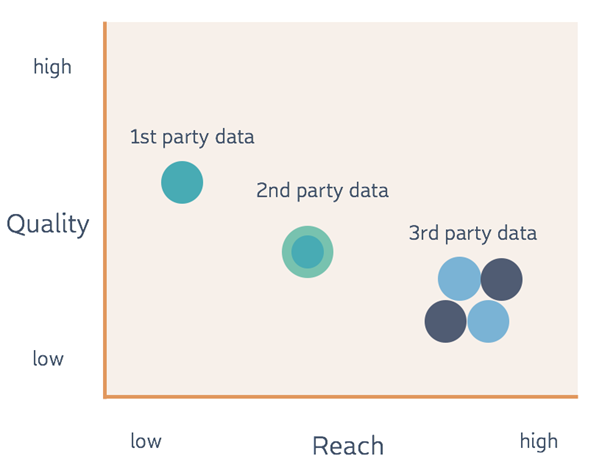 Well, first things first, we've got to figure out which data is which data. Starting with:

What is zero party data?

Zero party data is when a customer willingly and proactively shares information with a company. This might include product preferences, personal details and context, or how they want to be identified by the brand. It's all about asking, over inferring.

Forrester Research, who coined the term, describes it as:

"Zero-party data is that which a customer intentionally and proactively shares with a brand. It can include preference centre data, purchase intentions, personal context, and how the individual wants the brand to recognize [them]."

This data differs from the other three data types, as it is provided by the customer, and not theorised by their behaviour. It tends to be absent of the creepy, invasive nature that other forms of data collection can have. Basically, it's all about consent.

It's an equal exchange - zero party data is given freely, and in return the client gets their coveted personalised experience. In this way, it doesn't make sense to collect it for anonymous customers. Zero party data only makes sense for identified customers.

This form of data also tends to give companies a greater insight into customer needs, interests and intent, and explicitly rather than implied. Unlike first party data, which can only offer insight interpreted from purchase history or basic facts like date of birth.

Zero part data can be used in a couple of different scenarios, including:

What is first party data?

Basically, first-party data is collected from your own personal sources, and is often the most valuable. It's pretty easy to collect and manage, especially if you have a data management system.

Privacy concerns are also kept to a minimum, because you know where the data is coming from, and you own it yourself.

First party data can be used in a few ways, including:

The accuracy of first-party data makes it possible to produce reliable models based on client behaviour. Even with a small data set, there's going to be some valuable insights.

Because first party data is based on existing customers, you're in a key position to get out some good re-marketing, to target previous purchases. Plus you can also influence the customer experience and engagement by personalising advertising and site content.

Every brand has first-party data, but the problem is that it’s all siloed. Without a complete view of their customers, brands often spend too much money and effort in building and maintaining point to point integrations between systems. CDPs allow you to streamline that entire process by integrating all customer data in a single place for smarter targeting and personalization.”

So, first party data, though valuable, has its own faults. The main one being reach.

First party data is often restricted in its scale and breadth. The data might give you a detailed picture of your current, and specific, audience, but it gives no insights into new audiences.

This, then, gives you a great view of your current operations, but is not enough to make precise assumptions, nor create a targeted campaign.

Which categories of data does your organisation use regularly?

What is second party data?

Second party data is just first party data, but from a different source. Think twins separated at birth, one raised in a rich house, one raised in a poor house. Finding each other using two halves of an ancient locket, left behind by their birth mother. Then, after a chance meeting, they start a new adventure to...okay, I'm getting carried away.

If another business gathers data and wants to share it with you, it becomes second party data, that can be used for audience targeting or enriching your own database. This information can come from various sources owned by this company, such as websites, apps, or offline sources such as surveys.

This second party data can provide you with information about consumers potentially interested in your products, who may have a specific interest or behaviour. So, second-party data can be great at letting a marketer know when a consumer is in the market to make a purchase.

When you use second party data from your business partner, you get one brick that can build big 3rd party sets.

What is third party data?

These data aggregators collect data from a variety of websites and publishers. After collecting the data, the aggregator categorises it into handy categories, based on interests, characteristics, demographics, and more. But remember, everyone has access to this data, so you'll lose any competitive edge.

Third party data can be used in instances such as:

Though they sound similar, and are often confused, they're pretty different.

A third party cookie is a cookie placed onto a device by a website, from a domain other than the one a user is visiting, in order to store personalisation preferences and tracking info.

Third party data refers to data that did no originate with the buyer, as stated above.

What types of data does my marketing team need?

An organisation's data needs differ based on a few things, including their: 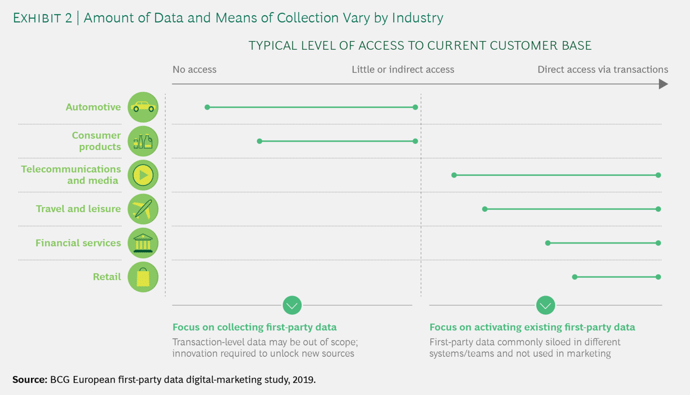 However, as an increasing number of data privacy regulations start ramping up, there's been a shift in how marketers use data.

Rather than relying on third party aggregators that may be breaching data regulations, marketers are tapping into more of their first and zero party data.

A recent survey  even found that 82% of marketers plan to increase their use of first-party data.

So, as a whole, the way forward seems to be to make the advertising ecosystem more focused on transparency and direct communication, rather than using underhand and sneaky methods of collecting data without knowledge or consent.

Although first party data has a few benefits, this seems to be the biggest. Paul Coffey agrees, stating:

"With the world turned on its head, it’s easy to overlook the role that data can play in helping many brands whose new focus is mere survival.

But businesses who prioritise responsible first party data to understand these changing consumer behaviours will be better placed to create marketing strategies that help them in the short-term — and when we move into recovery mode."

B2B Marketing: Stats and Trends for 2022