It feels like we – and more specifically I – tempt fate every other day by saying something like “the pandemic is drawing to a close now and things are starting to go back to normal,” but let’s be honest, proper normality still seems pretty far away.

Mind you, I suppose normality is somewhat relative, and maybe all of this nonsense is normal now? If things go back to the way they were in early-to-mid 2019, will that be normal? It’ll probably feel pretty weird.

Whatever happens, there’s one thing we can be sure on and that’s that I usually open articles like this by rambling to get the word-count up. That’s life, baby.

As you all know, this last year-and-a-half-or-so has seen us all working from home; rolling out of bed at 8:50am, getting a coffee and then putting on a shirt in time for the 9:00am Zoom meeting with the whole company. It’s been a wild ride for sure, but other than the obvious team meetings that have to take place via weirdly-positioned webcams (mine’s at the bottom of my laptop screen for some reason), the working from home trend has affected our working lives in completely new ways.

Back in the day, you’d arrange for a day out of networking and listening to people talk at an event at somewhere like Kensington Olympia or the ExCel Centre – or somewhere that isn’t in London – and for the most part, they’d always be thinly veiled excuses to drink too much and be courted by rival companies. They were somehow fun, exhausting and stressful all at the same time, but now they don’t really exist anymore.

These days, events are a little more like the morning meetings we roll out of bed for and pretend to be wearing proper trousers in. They’re all online and either take place via Zoom or Teams or a bespoke events platform app like All In The Loop, Canapii and EventX. Over here at The MarTech Alliance, we’ve had a number of our wonderful (and famous) anti-conferences go online via Bizzabo in the virtual space, and rather excitingly we have another Mini #MarTechFest Dial Up coming up soon!

Now obviously our virtual events are the best ones going and definitely worth you signing up for, but not every company is so on-the-ball in that regard, making pretty average events, either in person or online. But of the two options – virtual and in-person – which is the best? Once the pandemic is truly over, should one type be entirely wiped out and replaced with another? Well…

The Pros and Cons of virtual events

The average person in the UK has five or more internet-connected devices to their name. Sure, that can sometimes mean that they might have one of those weird smart fridge-freezers that you can tweet from for some reason, but more likely it means that they have a smart phone, a tablet, a computer or two and probably a smart TV.

Pretty much all of them can find their way onto a virtual platform if tasked with it, and for obvious reasons, that makes the events far more accessible.

Furthermore, if an event usually takes place in London, making the move to being online would mean that so many more people would be able to attend, for obvious reasons.

For the most part, with your standard in-person conference, once a talk has taken place then that’s it. If you miss it then you missed it for good. Of course, now a good few are recorded and placed online – like a TED Talk or something – but mostly it’s a one-off situation.

With virtual events, the likelihood is that some of the talks are pre-recorded for ease of publishing and editing purposes (as well as them being recorded when presented live), and subsequently uploaded onto some sort of intranet or web-service for people who were unable to make the talk at the specific moment that it was debuted.

Because of this, attendees don’t need to stress about missing various keynotes or rushing from one exhibition to another, as most of the content will be waiting for them at their fingertips. It’s a very useful system and one that saves people and an awful lot of strife.

In the case of events like webinars, almost half of your audience may watch in on-demand. Stats from our 2021 Webinar Benchmarks Report webinar (in partnership with ON24) found that 43% of views are on-demand. 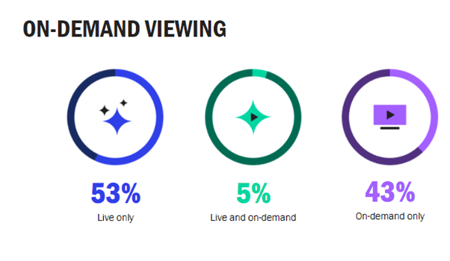 The data garnered from hosting an online event can be absolutely invaluable to a company looking to generate interest in their product or service. While many in-person events will require some sort of sign-up process, virtual events are almost always gated until a prospect gives you an email address and fills out a small form about where they’re from, their company and a few more small details.

The tech behind virtual events can also allow you to collect data on viewing habits, the questions people asked, and other insights which can help your sales teams.

Like I say, singing up to an in-person event can be similar, but it can also involve having a physical form filled out on *shudder* paper, and then having to input the data yourself manually. No-one has the time for that.

As you’re no doubt aware – given that you’re a person reading an article on virtual and in-person events – having an online meeting via Zoom or another similar platform that lasts more that 30 seconds can be absolutely interminable.

It’s so easy for your mind to drift when you’re sitting in front of a laptop screen, and when you have someone rambling for 30 minutes to an hour about something or other, without having anyone else around you and no physical connection to the speaker, it can be very hard to care.

Of course it’s worth noting that this is more of a human error than anything to do with software, and the same thing could even be said about other intensely popular applications (like Tinder in comparison to meeting people in person), but that’s something anything that takes place online in lieu of “the real thing” has to contend with.

Leaving a keynote talk in person is an awkward situation that most would try to avoid, while having something on your computer drone on for minute after minute would seldom stop anyone from stepping away from their desk for a moment to make a coffee or have a browse through Twitter.

This one speaks for itself. If you are sitting in your office or kitchen or living room alone, watching someone present a live talk to a camera rather than a room full of people, it can be harder to connect on a personal level.

The best events and speakers will get around this, but this can be an issue for some.

The Pros and Cons of in-person events

Not to be confused with a ‘loser attitude’ - having one of them is obviously a bad thing – having a looser attitude more or less feeds into the idea that leaving the office for a day and going to an event, especially in the evenings, can easily turn into a ‘work day out’.

Generally, people have more fun in person regardless of what’s happening. Just think back to the last time you went to a real pub quiz, compared to the last time you did an online pub quiz with your friends, which was an intensely popular pastime here in the UK at the beginning of lockdown 1.0 for some reason.

The ‘work day out’ attitude of course means that some people maybe have a few too many glasses of complimentary prosecco, but it can also mean that people are more loose-lipped when networking and generally mingling, which leads to a more positive attitude towards your event and can often result in more deals being opened and subsequently closed.

Sort of mentioned in the last point, talking in person is more efficient and effective than talking over a webcam or some sort of instant messenger. These days, virtual event platforms try to recreate the whole 'foyer' feel of being between keynotes and talks at an in-person event, but that’s not a situation easily simulated.

Bumping into someone and talking about what you just watched or how work’s going or anything like that can be all it takes to start a serious business connection – or simply have a better time – and for the time being, until something Ready Player One-esque happens to online events, then the only way you’ll be able to achieve a smooth and symbiotic relationship like that is through in-person events.

One of the best things about going to an events space is walking around the various stalls and talks and picking up a load of nonsense you don’t need. A little pen with a company’s logo on it? Sure. Five separate branded notepads? Yes please. A lanyard that you’ll literally never use? I need me one of those bad boys.

These are all things that don’t cost an awful lot to produce and somehow make people think better about the company giving them out.

For better or worse, this isn’t something that can easily be replicated online, short of asking people to input their addresses into a form and sending them a box of freebies, which you can rule out for the overheads alone. Furthermore, by the time that goodies actually reach the prospect, they’ll probably have forgotten about you already and the benefits of speculating to accumulate, so to speak, would be lost.

As you probably know or have assumed, renting entire event spaces, booking keynote speakers, potentially providing catering, and getting everything in one place at one time is a logistical challenge, and can be a very expensive one at that.

While the returns could be superb, studies from 2019 showed that fewer people were attending in-person events compared to the year before, which could put a huge and costly spanner in the works.

It seems unlikely that in-person events will be replaced entirely with online conferences. Regardless of how convincing and useful certain apps and platforms are, they will never truly be able to recreate a boisterous CEO or two having one too many shandies and hitting the exhibition floor with an aim to make deals, shake hands with as many people as possible and throw their weight around.

Everyone will be sober in online conferences and will also have the opportunity to step away from their computer or phone to answer the door or make a coffee or simply just pretend to be working while actually watching YouTube. I’m not saying I’d do that… Just some irresponsible sorts might?

With that said, there are around – and this is a rough estimate – 17 billion conferences every month, so it stands to reason that virtual platforms could be useful for the less prestigious events that certain people may not deem important enough to fly to another country or take a day off work to visit, but will still be interested in checking out.

The consumer habits of tje pandemic are likely to continue, so while

In general, flying anywhere or even travelling too far is enough hassle to deter certain people's interest, so it seems like the best way to do things would be by offering in-person events, while allowing people to watch keynote speakers online if they miss one or can't attend for whatever reason.

Much to think on.